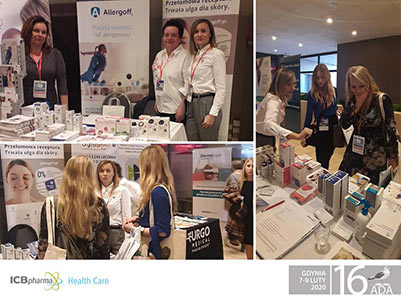 Health Care Team at the conference in Gdynia

The program of the Conference was rich of workshops and lectures starting from the early morning and lasting till the late evening.

Over 230 doctors, the lecturers and other guests were invited to the conference.

Among invited doctors, the dermatologists were the most numerous group who visited our booth with real enthusiasm and attention. 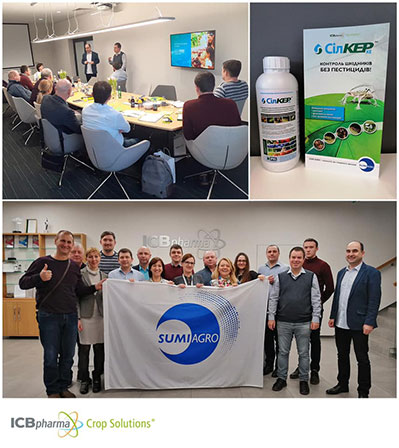 We would like to express our thanks to Summit-Agro Ukraine articipation in meeting revolved around the Siltac EC insecticide.

This time we were hosting regional representatives and technical experts. As a result of their great experience the workshops were highly specialized and informative.

We keep our fingers crossed for our successful cooperation on the Ukrainian market. 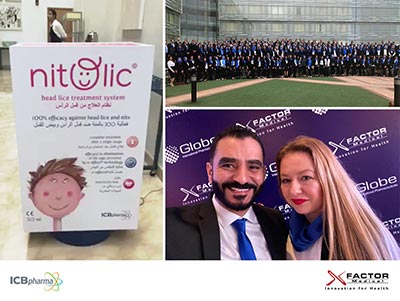 Last month – Ms Anna Gawron, the Head of Health Care Department – represented ICB Pharma in „Kick off 2020” meeting which was organized by our business partners – XFactor Medical and Globe Pharmaceuticals in Cairo.

Thank you for the invitation and possibilty of presentation the ICB Pharma and Nitolic brand.

Thanks to a huge involvment of our partners in promotion and sales, the Nitolic brand becomes more and more successfull on Egyptian market. 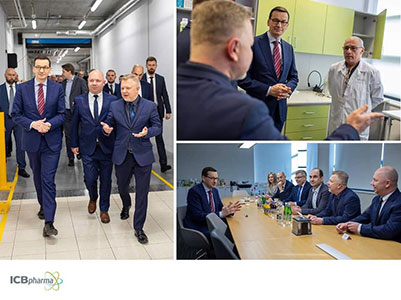 The Prime Minister gave a speech and his words etched in our memory: “The heart is growing that in Poland we have companies that can be globally successful. I am proud that Polish entrepreneurs, scientists, employees, technicians and engineers are able to create such a great work. Here, in this company I see the great Polish potential, creativity of economic development based on innovative Polish products. Ladies and Gentlemen, we need such companies and such economic development. The sources of our success lie precisely in companies like this one in Jaworzno, as well as in the minds and ideas of our scientists and researchers.” 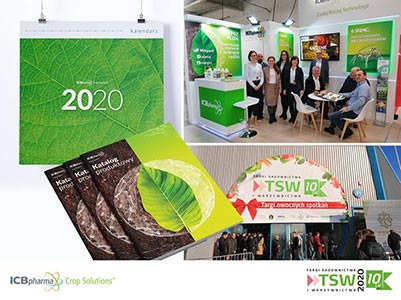 We would like to thank all the visitors who came over to know us and to get useful information about our innovative solutions.

We look forward to continuing the talks we have started, which will lead us to new cooperations with great partners.

Thank you again and see you next year. 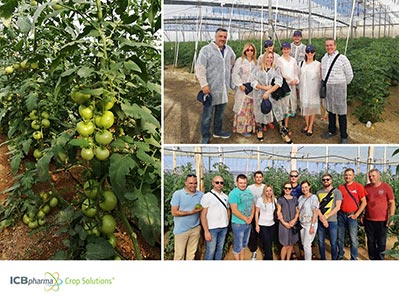 At the beginning of October when in Jaworzno was 14˚C, the Crop Solutions team experienced a slightly higher temperature thanks to Leven Agricola from Spain. Thanks to their commitment, our main product Siltac has been already introduced to tomato cultivation in greenhouses.

It is worth to mention that Spain and mostly Almeria in the region of Andalusia is the main producer of tomatoes for the European market. Thus, we are extremely proud that we can support the production of healthy vegetables with no pesticides residues.

Also, we would like use this opportunity and thank our partner Summit-Agro Ukraine for their presence during our visit in Spain and participation in product workshops organized by Leven Agricola. 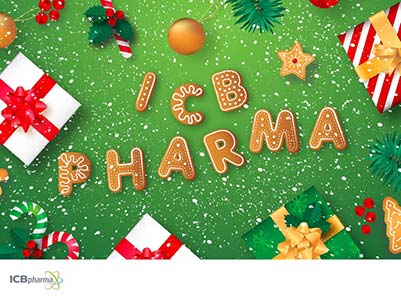 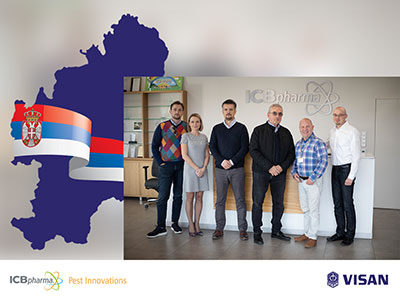 This time for Serbia!

For years we have collaborated with Visan company, which is one of the most prominent experts in the field of Pest Control in Serbia.

A month ago, we were honored to welcome the owner of Visan company together with his close associates. As a result, we are discussing the possibility of launching new products of the Pest Innovations Department in the market of Serbia.

Indonesia belongs to one of the biggest tea planters in the world.

Local planters come up against serious problems like eradicating aggressive pests along with the pesticide residues limitation. Even in this far – distant country ICB Pharma and its innovative solutions was spotted and appreciated.

Siltac turns out to be perfect and unique antidote for the problems of tea planters. In November, Crop Solution representative paid a visit in Indonesia to conduct the field tests in order to demonstrate the most effective usage of Siltac against pests on the tea plants. The workshop was very productive, the sides shared many experiences.

As it was pointed by one of the Indonesian participants; The Queen Elisabeth II will enjoy her 5 o’clock tea treat with the Indonesian specialty– free from pesticides residues. 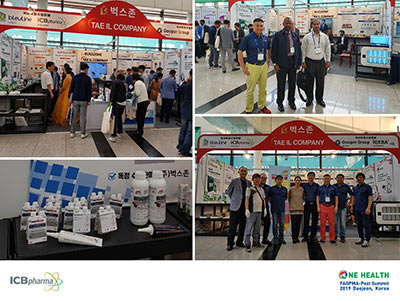 FAOPMA Pest Summit is the most prestigious event in pest control industry taking place in Asia and Oceania.

It is the lively meeting place for the leading suppliers of the pest products. Although the exhibition is situated more than 8000 kilometers from our office, ICB Pharma products were available on the stand of our authorized distributor in that region.

We are particularly proud and pleased that ProVecta and Dergall still attract new customers and succeed on more and more markets. 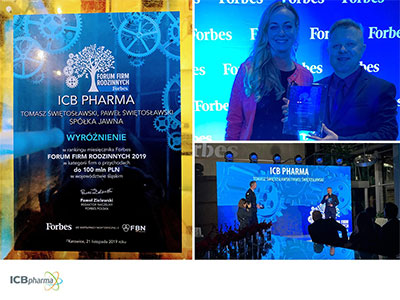 On November 21st at MONOPOL Hotel in Katowice gathered the most valuable family companies from both ślaski and opolski district, to award them with prizes and distinctions. The ranking of family owned companies of Forbes.pl magazine is a prestigious ranking of the most dynamically developing family businesses in Poland. 2612 companies were selected as prize winners.

ICB Pharma was distinguished in a category of the companies making up to 100 mln PLN of income in śląski district and came in at number 24 among other companies from that district.

We are proud and extremely surprised! The topics like “Is it profitable to run the family business in Poland” were discussed during a meaningful debate. Among the arguments for, it was emphasised that family businesses are more socially responsible, reliable and stable, also in the field of establishing partnerships.

We would like to thank all our employees and partners; both present and prospective ones, for whom these are the values that determine partnership. 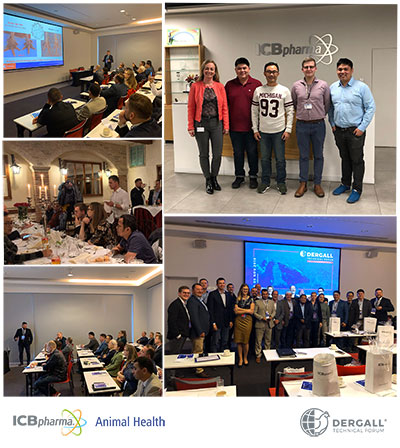 2nd Edition of Dergall Summit already behind us

On 19-21.11.2019 we had an enormous pleasure to host our partners and veterinarians from around the world for the second edition of Dergall Technical Forum; a meeting wit ha goal of spreading the knowledge of proper biosecurity in animal cultivation using product Dergall and exchange of ideas and experiences between specialists and practitioners from many corners of the world.

It was a great experience showing the ambition and inventiveness of all participants.

It is after events such as this, that we are waiting with anticipation for the further development of Dergall brand. 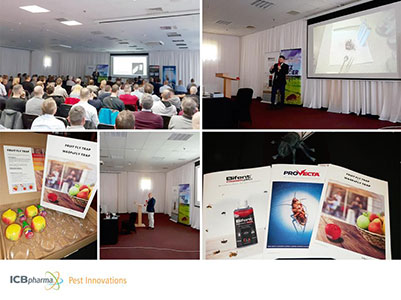 “A review of the chemical methods of the control of flying insects on the example of house fly and Vespidae” was the title of the training organized last Friday in Stryków (near to Łódź).
Over 200 specialists of disinfection, disinsection and deratisation were developing their knowledge of that topic with us.

At the invitation of ICB Pharma some lectures were delivered by well recognized expert and entomologist Professor Dr hab. Stanisław Ignatowicz, what definitely raised the dimension of the event.

Thanks to that, all the products presented by ICB Pharma: Provecta, Bifent Fogger Plus, Fruit Fly Traps and Wasp&Fly Traps got a lot of interest and attracted visitors to our stand.

It is very important for us to share the most recent knowledge with experts in the field of DDD. 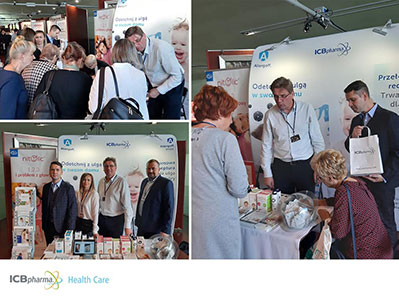 A symposium we could not miss!

On November 6-8, 2019 at the Cracow Opera House, ICB Pharma took part in a conference during which a few distinguished experts have given their speech. We couldn’t miss the 25th Jubilee of Scientific and Training Symposium called “Progress in allergology and pneumonology”.

Our products of Allergoff line have brought a huge interest and our stand was invaded by visitors.

Thank you all for being there with us and your help promoting our brand. Multiple conversations with doctors and the effectiveness of our products will help in the prevention and treatment of troublesome allergy symptoms. We wish you good health!!!

To find out more what aroused such a great interest, please visit our website www.allergoff.com. 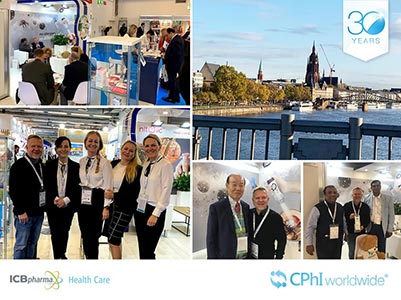 CPhI 2019 in Frankfurt is over now

On November 5-7, 2019, ICB Pharma took part in one of the largest events in the pharmaceutical industry – the CPhI fair in Frankfurt, which has an established position and over 30 years of experience. Under one roof, over 2,500 exhibitors from 150 countries met in nine huge exhibition halls.

ICB Pharma health care products have met with such a great interest.

We would like to thank all the visitors who came over to know us and to get useful information about our innovative solutions. We look forward to continuing the talks we have started, which will lead us to new cooperations with great partners.

Thank you again and see you next year in Milan. 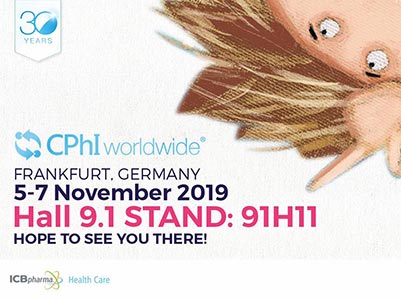 With a great pleasure we would like to inform you that ICB Pharma is taking part in CPhI Frankfurt, 5-7th November, 2019.

We would like to invite you to come and take a look at our booth – stand location 91H11, Hall 9.1 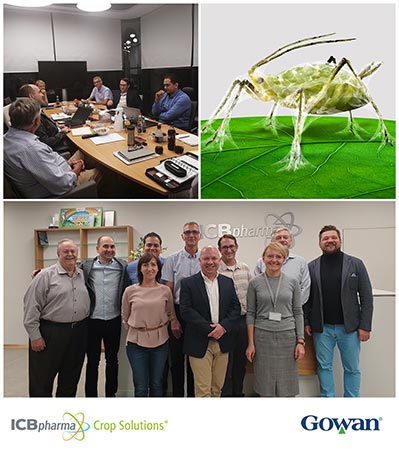 Visit of our partner from overseas

At the end of September, we had the pleasure to host representatives of the GOWAN company which is dynamically growing and has many years of experience in crop protection.

During the visit we had a chance to discuss possible directions of development but also to present our portfolio with detailed explanation of product application. As usual Siltac and its breakthrough technology played the main role.

Now we are awaiting good news from across the ocean. 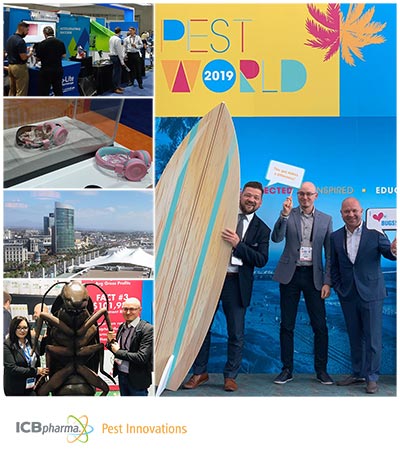 One of the biggest events in the pest control industry PestWorld 2019 in San Diego, USA came to the end.

We were there together with our business partners to be close to what is present and to all the trends which create this growing industry. All of these experiences and freshly gained knowledge we took home, so we can develop new products and create new technologies. As usual, it was worth being there.

Thank you all for coming and visiting our stand. 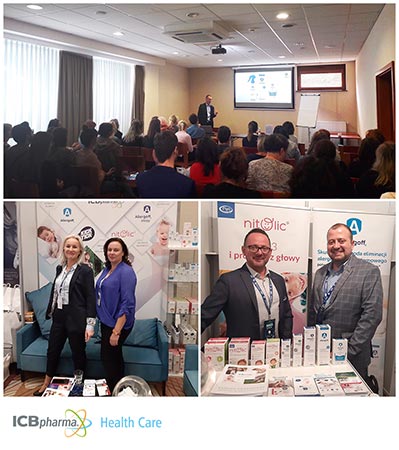 Last quarter of this year is very intense and abounds in various meetings of the pharmaceutical industry. This means an increased activity and participation in numerous events by ICB Pharma Health Care Representatives.

Behind us already are some trade fairs organized by Dr Max network and the Polish Pharmaceutical Group where about 800 pharmacists participated. Another great event was a training session organized by DGA network – Lekosfera with a cooperation of ICB Pharma Consultants.

We were also in Warsaw at a meeting organized by Neuca, where we presented our products to the pharmacist. 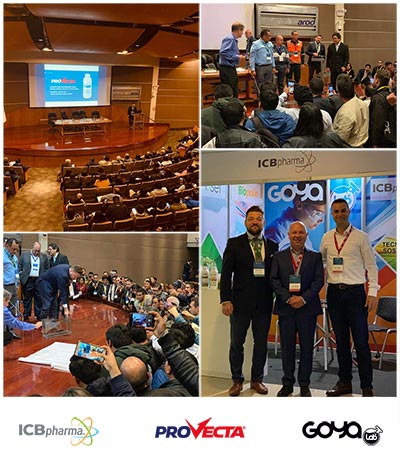 Back in September took place PLAGAS of 2019, the International Congress in Colegio Médico del Perú which was attended by nearly 1000 participants from around the world.

ICB Pharma and our representative Goya Lab – Brazil together with help of UNIVAR implemented our product PROVECTA on Latin American market. The substantive and practical part of product application aroused huge interest.

We are looking forward to seeing great results of our cooperation. 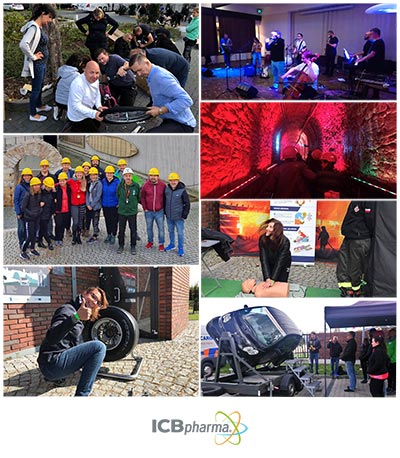 As a company we constantly grow in size and get stronger each day. We work hard on new developments, create new projects, which conclude in new contracts.

However, we also find time to celebrate our traditions together. Another company trip has proved that we are a Big ICB Pharma Family. We spent 28 hours together – competing, playing, dancing and having fun. But our fun time has been combine with a Good Cause event – all assembled bikes will be donated to the foster home for children in need.

We are extremely happy and we are already looking forward to our next trip!